Can we lower the Requirement for #Reputation to add a comment?

Can we lower the Requirement for #Reputation to add a comment? Right now, I think the setting is 50 Reputation will allow you the Comment-privilege. We have an increase in the flux of new users, and if they have <100 Reputation, we shouldn't reprimand these users so harshly for writing "low quality posts" because they resorted to writing a solution because they don't have the comment-privilege.

Can we lower our Privilege settings to create a more friendly atmosphere for new users?

I don't think that it should be lowered. Commenting is a privilege that is gained after a certain amount of participation which is acceptable to me.

I don't think that they should be reprimanded harshly. Sometimes short, text-only internet interactions are taken the wrong way and seem harsher than they are intended. Sometimes they are harsh, though.

Sometimes the non answers by low rep users are really new questions and users without enough rep for commenting can always ask a separate question.

We leave a comment instructing them that their answer is not an answer and that they should refer to the about page or something to that effect. It is reasonable, in my opinion, to expect someone to take the time to read about how the site works.

Beyond that, comments fulfill a very specific purpose which is easily misused before someone has a bit experience with the site. The reputation system is a rough measurement of that experience. It doesn't take much reputation to access those features, so we ask that users simply hold off using feature that can easily be misused (comments, voting, editing, closing, etc), at least until they have a bit more experience using the site.

I would like to bring this up again because every couple days there is someone asking questions like this in an Answer: 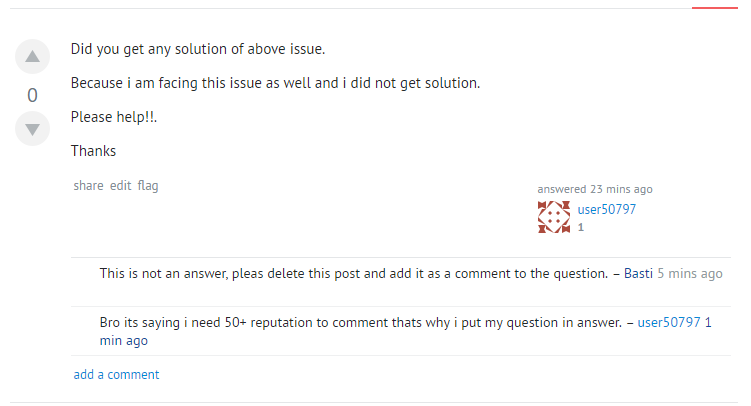 And I totally understand their intention. It would be way less disturbing if we had these as comments. What could go wrong if everybody could comment?

Not the answer you're looking for? Browse other questions tagged support new-users .

5
What is the Reputation cap?
4
Can someone see who downvoted the post or answers?
11
Voting to close posts vs comment/edit approach
9
Difficulties for New Users
5
Have Reputation Requirements for Privileges Changed?
2
Losing Reputation For What Seems Like No Reason
0
How to increase reputation when unable to answer or comment
0
I need to know most cost effective way to allow users to update their info in Salesforce
9
Is copying someone else's comment template for new users considered as mean/bad practice?