What's going on with code blocks?

In addition to the lack of syntax highlighting >:(, it... looks like inline code! How about a unified rectangle instead? Put the border on the <pre>, not <code>.

Also, while writing this meta post "draft saved" would pop up in the top left corner and it seems to be lacking position: absolute or something since it pushed my codeblock right until it vanished about 5s later.

For those from the future

(ew, no left-padding for the header) 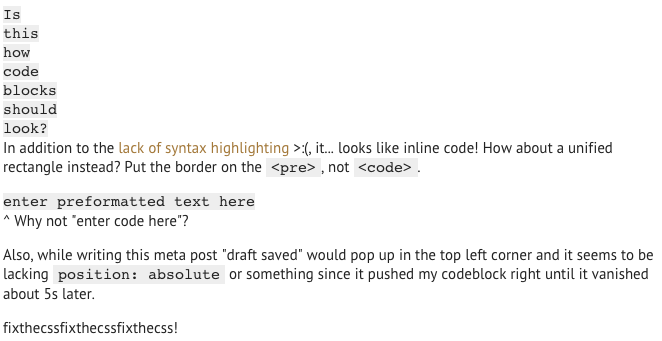 I have pushed a fix for this. It will be on live after our next production build.

Not the answer you're looking for? Browse other questions tagged bug status-completed design .

27
Can we enable Syntax Highlighting for Apex and Visualforce code blocks?

27
Can we enable Syntax Highlighting for Apex and Visualforce code blocks?
10
Styling issue on header background with new nav bar