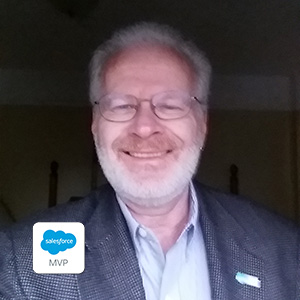 I'm a Salesforce MVP whose certifications include: ADM-201, Platform App Builder, PD I, Sales Cloud Consultant, Dev Lifecycle & Deployment Designer, and Integration Designer. A friend who's a Solution Architect/Consultant introduced me to the platform in the fall of 2012, after which I began writing triggers, controllers, Custom VF pages, PDF Templates, along with other custom code. I've been enjoying learning Salesforce ever since.

I'm a former member of it's Leadership Team and also co-led a Dev I/II Study Group. I can be found on Twitter as @cloudmech.

A mechanical engineer by education, I've been programming in various languages since the days of punched cards (that's before PC's or floppy drives existed).

In the mid 1990's I opened a DTP/Graphic Design company and where web design was a large part of what I did. In the late 1990's I was invited to become a Sysop in the Adobe Forum on CompuServe eventually becoming the Manager of WUGNET's Windows NT/2000 Forum until mid 2001. During the same period, I wrote for NT Update and Web Update Journals. Until I began learning Salesforce, I created art and photorealistic animations; regularly working with Maya, After Effects, Photoshop, Illustrator and other computer graphics software.

This user has not participated in any tags.